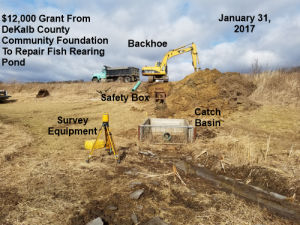 Fingerling largemouth bass (1- 1½” long) from the State Of Illinois Fish Hatchery are released into the rearing pond yearly in early June.  The Bass feed all Summer long on minnows, crawdads and bugs. The rearing pond is then drained in early October.  By then, the Bass have grown to 5 to 7 inches.  As the pond drains, the Bass are collected and placed into nearby Shabbona Lake. The survival rate of the 5,000 fingerlings has been increased from approximate 1% to over 50%.

The drainage and the collection is a popular annual event spearheaded by the Shabbona Lake Sportsman Club. Over the years, hundreds of Boy Scouts, Girl Scouts, young anglers and many, many fisherpersons have helped release thousands of Bass into Shabbona Lake. The date of the event is posted on www.shabbonalake.com and is open to the public.

Friends Of Shabbona Lake State Park is a 501c3 organization open to the public.  More information about the organization and how to join or donate can be found at www.friendsofshabbonalake.com.

A BIG THANK YOU to the DeKalb County Community Foundation from “all of those who have fished or ever will fish” Shabbona Lake.  The quote is from the “Founding Fathers of Shabbona Lake Plaque” honoring those who helped make Shabbona Lake State Park a reality in the early 1970’s.  Their dedication and tradition lives on!